April showers bring May flowers they say—they didn’t say anything about April blizzards. So when our last snowstorm of the season hit in mid-April, we decided to board a plane and head to the sunshine state of Florida; after removing the 17” of snow of our driveway, of course…

Tampa has become a frequent destination for us when we need relief from the weather in the “Bold North”. After a quick taxi ride to the Minneapolis airport, and 2 1/2 hours at 30,000ft, we are greeted by 80 degrees, extended family and endless fishing opportunities.

This trip marked my 3rd time boarding a plane to Tampa with a fly rod in my possession. The first two trips came with a big learning curve, but each ended with me holding a snook and sporting a big smile. The target objects of this trip, however, would be different.

Although success was recognized in my previous visits, I wanted to shorten the learning curve and learn from an expert. I called the handful of local guides that I could find online, but to my disappointment, none of them had availability—turns out I was coming during the beginning of tarpon season. Thankfully one of the guides made a few changes to his schedule and fit us in. I didn’t know what to expect, but I was thrilled to be going out on a flats boat with well-known guide Captain Greg Peterson, chasing fish as big as I am.

I couldn’t help but smile under my sun mask as we ripped out to one of Greg’s spots the next morning. His knowledge of the water was quickly made evident as he weaved through shallow flats at full speed, knowing exactly the path we needed to stay on to avoid getting stuck. The next few hours were completely new and came with both excitement and nerves—my objective was to learn; fish would be a bonus.

I very quickly realized that the casting required of me was much different than what I’m used to in the Driftless Area. Not only was the casting distance a new challenge, but even the slightest breeze had to be taken into consideration. I take pride in my short distance, streamer-casting accuracy required to be successful in the tight Driftless streams, but there wasn’t much to be proud of with the start to my day on the flats. Double hauling, and overall distance weren’t the problem, it was the accuracy and presentation. I knew I had the ability to cast the distance required, but didn’t anticipate the impact of the wind, and the delicacy needed to keep the fish from spooking; not to mention the adrenaline that would need to be controlled.

Captain Greg quickly offered some casting pointers, which I tried to apply on 100% of my casts, but realistically only managed on 50% at best. When you’re staring at a 150lb tarpon, it’s hard to think clearly.  Adrenaline fills your body and you start to freak out inside. Greg tried his best to keep me calm and concentrated as he quietly poled us around the flats with what looked like a pole vaulter’s pole. He would spot the long dark shadows in the water from his perch at the back of the boat, call out the direction on the “clock”, and then shout out the distance, “We have two fish moving left to right, 1 o’clock at 50 ft.”… pause… “Okay, go!”

This is where I wish I could tell you I placed a perfect cast 3 feet in front of the 150 lb beast, making sure only my leader, not fly line, crossed their face, and after a few slow strips the fish ate…. but unfortunately, that isn’t how it went down.

I often found myself casting too short, too long, or casting the fly line over their head, causing them to spook. Captain Greg did a good job keeping his cool and positive attitude, but I could tell he was getting as frustrated as I was, because he wanted me to land my first tarpon as badly as I did. At the day’s end, I had to hang my hat on the fact that I got a few fish to follow my fly—one for 10+ ft. that Greg was surprised didn’t eat. That meant I did something right… right? Even though I didn’t get an eat, I experienced that rush that drives people to chase these giant creatures with fly rods. My knees shook at the sight of the chase. I don’t know what I would have done if I had connected on that fish, but I hope to find out someday.

Abigail was able to break the skunk by catching a cobia on our way off the flats. It was a super aggressive fish, that gave Abigail a good battle by trying to wrap her line around a pole in the water. Captain Greg was able to grab the fish after Abigail got it boat-side, and held it long enough for me to snap a quick picture of the two of them. 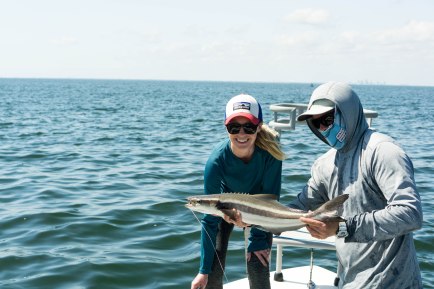 As we drove back to the landing, Greg slapped me on the leg, chuckled, and said “Hey, most people would be pretty mad if you had gotten one on your first try.” That was all the “encouragement” I needed to start planning my next shot at one of fly fishing’s most prized catches. I will return with my expectations still in check, but with more practice distance casting 11wt rods with soft presentations. Who knows what will happen, but I’m sure it’ll be a story.

In the following days spent in the sunshine state, we were able to catch a variety of different species, out fishing with my cousin Andrew. No tarpon, but no complaints from us! 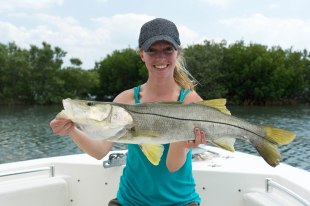 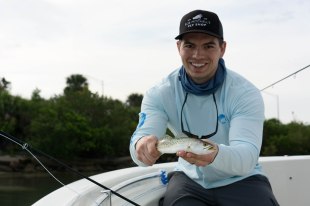 *5 things I would recommend to anyone thinking about trying tarpon for the first time:

For those of you that don’t know much about tarpon, or tarpon fly fishing, below is a video that Yeti produced featuring one of Captain Greg’s friends, David Mangum, another Florida tarpon guide. If you haven’t considered giving it a try before, you will after watching this video… I promise.

2 thoughts on “From Freezing to Flats”